The Token Engineering Commons hopes to advance the field of token engineering by creating a purpose driven economy that will curate and fund TE projects with an aligned focus.

This implementation spec is for the TEC TEST Hatch DAO, while real money was used, there is no expectation of anything happening with this DAO. This is simply a test.

Holders of Token Engineering Commons TEST Hatch DAO Tokens control the funds sent to the Hatch collectively and individually and can take part in key governance decisions of the project.

Dandelion Voting is “god-mode” within the TEC Hatch DAO. It controls almost everything in the DAO. TESTTECH Token holders use this application to collectively decide how to use the funds within the DAO and can control the smart contract system that makes up the DAO.

Tollgate controls the cost of creating a dandelion voting proposal.

Hatch oracle controls how much funds the hatch can receive from a specific address. The sending address needs to have a minimum amount of membership score tokens in order to send to the Hatch.

Agent 1 can interact with smart contracts and controls the funds set aside to advance the field of Token Engineering. It is controlled by the Dandelion Voting App.

Agent 2 can interact with smart contracts and controls the funds set aside to create the economy of TE Commons. It is controlled by the Dandelion Voting App. The funds here can also be redeemed by the individual TESTTECH token holders on a pro rata basis.

Redemptions enables TESTTECH token holders to redeem their tokens for the tokens in Agent 2 (the Redeemable Pool) on a pro rata basis. These are the funds set aside to create the economy of TE Commons. 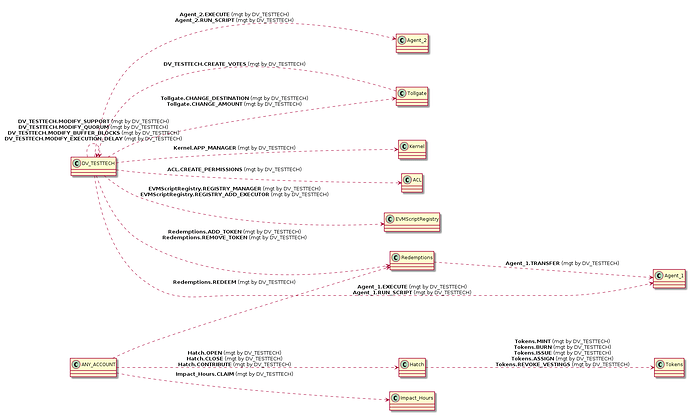 There is a missing Permission around Redemptions and agent 1

I updated the original post in order to reflect that

@sem to propose to the Dandelion Voting App… do you have to have TECH tokens?

No, because the CREATE_VOTE_ROLE is given to the Tollgate app, and it only requires a payment to forward the actions. We can add it if you think it should be a requirement.

No need to change it. It’s great that DAOtoshi Nakomoto will be able to propose if they want.

The original TEC TEST Hatch DAO had some bugs that have been corrected in successive deployments, and we also included the Migration Tools app. Here is the final spec.

EDIT May 26th, 2021: CREATE_VOTES role was previously restricted with a TIMESTAMP parameter, but it was not working well when we don’t know the open date on the DAO creation, so it has been changed to an ACL oracle in this commit.

Wow Sem, this is fantastic documentation