This machine state diagram represents the different states that the TEC Hatch DAO will have from its deployment to its migration to another DAO. We distinguish between normal actions (red arrows), which are commonly made by most of the users, and administrative actions (blue arrows), which can be made by anyone but only if the requirements are met, and usually make the DAO advance in its state. 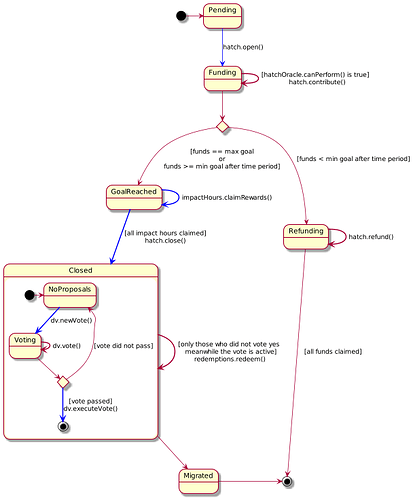 When the hatch is closed, we create a migration vote which transfers the funds from the Redeemable and the Non-Redeemable Pools to a new DAO. The same vote gives control of the DAO to the

We describe the different states and their available actions with more detail.

It’s the initial state of the DAO.

In this state people can contribute to the hatch.

We reached the Minimum Goal, its the time to mint tokens for impact hours token holders, and send the funds to the Non-Redeemable and Redeemable pools.

The min goal was not reached in the specified hatch.period(). People can recover the funds they have contributed.

How does the migration vote work?

In the Closed state, a migration vote is created by depositing a tollgate fee into the Non-Redeemable Pool. The vote is an EVM script with the following structure:

“Organization tokens” are redeemable by reserve “contributed tokens” only by those who did not vote yes meanwhile the vote is active. This is how it works from the user perspective: 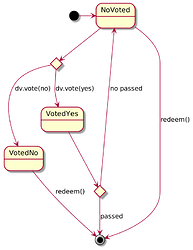 When we are in the Closed state, the funds are split between the Redeemable and the Non-Redeemable Pool. Users can redeem their “organization tokens” for reserve’s “contributed tokens” at any time, except if they have voted yes on an active voting. In that case, their tokens are not redeemable until the vote ends. In the case the vote doesn’t pass, the funds are still in the reserve agent, and they are redeemable again by the user.