The original proposal that was forked was merging of The Bolshevik’s Gambit fork with Lower Min. Quorum #72’s Token Thaw and Tao Voting (with a few tweaks) and Goldilocks’ Million Dollar Entry into Orogeny #71 CV and ABC with a few tweaks

So shout out to Juanka, Angela, Lauren, Mitch, Nate, Zep and Tam who all influenced this config.

This Proposal expects a strong community that can coordinate to pass both Tao Voting and Conviction Voting Proposals. The real things to note about this proposal is the ability to get ~1 million dollars in the Common Pool, the Strategy around the Entry and Exit Tributes, the 5 day Tao Voting period, $1 opening price and the 20% Reserve Ratio. 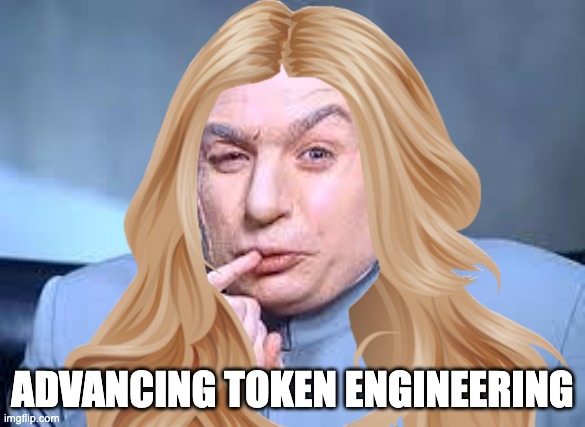 This proposal has a high entry tribute to act as a minting tax early on, which might dissuade speculators and attract value-aligned participants that missed the Hatch and are smart enough to see that the low reserve ratio will still allow them to make a profit if they get in early, and are happy to fund the Advancement of Token Engineering.

With this strategy, we should change the Tributes every month so that they gradually go from 22% and 2% to 2% and 12% in 5 months. This could be done every month by decreasing the Entry Tribute by 4% and increasing the Exit Tribute by 2%. It is important for our long term growth to have a high exit tribute so that if the price is going down, more money is flowing into the Common Pool so that as a community we can provide more value to our token holders and the TE community. It also helps us practice our Governance Procedures early on so that we are ready and practiced to actively govern our Commons as a Community.

If we are smart, we will eventually want to set the Entry Tribute to 100% when we reach a decent sized market cap and good liquidity so that the bonding curve can act as a parachute if the Price crashes but we stop printing TEC once we are large enough and don’t need the liquidity protection of the bonding curve. We might even consider using the funds in the bonding curve to advance token engineering if the Common Pool gets low, and our liquidity is high.

The CV Params are set so that it takes a week to pass any serious proposal with 15-20% of token holders sitting with their tokens behind the proposal, but with a higher Minimum Conviction and faster Conviction Growth and a smaller Spending Limit. This will make the Token holders have to coordinate (without having to talk) to pass proposals… I can imagine that Transparency/Comms will want to post and Tweet the Passing and Leading proposals that have a lot of voting power behind them every week to aid voters in coordinating around advancing token engineering.

This parameter set is full of round simple numbers and the outcome is “Just Right” as Goldilocks would expect.

By setting the Opening price at $1 we recognize that there are more TEC friends out there that could try to jump in ASAP, but don’t alienate the Hatchers.

A 6 month of Freeze is a reasonable amount of time in crypto to hold tokens.

A year of Thaw means that TEC holder’s will be very unlikely to sell their Tokens for a while longer after that 6 months since so little will be available. If they intend to sell they will wait and speculate a bit longer.

If a Hatcher had 10k TEC, they would get ~27.4 TEC liquid every day during that year.

This is “Just Right.”

Even with a low Reserve (~390k) the Reserve Ratio is at 20% thanks to the $1 Opening Price. This 20% Reserve Ratio allows for the price to grow at a fast rate and give people that crypto token volatility everyone wants… but isn’t a DAO casino, not the slightest. The 250k initial buy only changes the price 38 cents. Giving the Hatchers a 38% profit out the gate.

This is GREAT! And with the 22% entry tribute, we only need to sell 90k worth of tokens after the initial buy to get ~1 mil in the Common Pool!

This gives us a nice runway to get a jumpstart on Advancing Token Engineering!

The Entry Tribute (22%) is extremely high… but this is more of a tax on minting and the ABC is the only way to get tokens to start so I think it will not dissuade early contributors that are value aligned and if it does we are doing bad marketing on it. Our Comms TEAM rocks! We will sell the token at any Tribute, ICO’s have 100% Tribute

The UI doesn’t show the tributes except in a little question mark… Check it out at https://convert.tecommons.org/ so if people want to buy tokens to support us and invest in Advancing Token Engineering to make the world a better place, they will just buy the tokens, we don’t have to promote the Tribute in Comms.

Also I assume it will take less than month to put up the Liquidity Pool… so the go to place will be Honeyswap very quickly after launch and the Tributes will really become a minting tax.

That being said, we should invert the Tributes before the Hatchers can sell tokens. If this proposal is chosen the intention is to reduce the entry tribute 4% and raise the exit tribute 2% every month until the tributes end up as 2% entry and 12% exit after 5 months.

If we lower it 4% a month, we only have to sell ~40k worth of tokens every month for it to make sense to mint the token this month instead of waiting to buy next month when the proposal goes through. If we wanted less sharp changes, we can reduce the entry tribute 2% and raise the exit tribute 1% every 2 weeks.

The Reserve Ratio is at a healthy 20% which gives the token price room to grow, but doesn’t give the Hatchers too much Governance power (relative to the people that buy tokens later).

Tao Voting is used for on-chain smart contract decisions, so delegates will be huge and we should really emphasize that, so we can have a 10% quorum no problem, and there is one TECH holder with 9% of the tokens so 10% stops them from passing quorum by themselves.

Given the importance of Tao decisions, we should keep a high consensus requirement of 85%.

The big thing here is that quiet ending period overlaps the delegates voting period so if there is a contentious vote within the Delegates, an extra 2 days can be added so #TECoinstituents have time to change their delegates vote.

A quick-er vote duration means we could wrap up and execute votes within 5.5 days. If there’s any contention 2 days are added to the vote so we have ample time for more participation.

A 12 hour minimum execution delay is given even though there is a 3 day quiet ending period so people won’t really ever be surprised by an outcome… but still anyone who REALLY cares would never be asleep after the outcome is certain with a 12 hour delay. 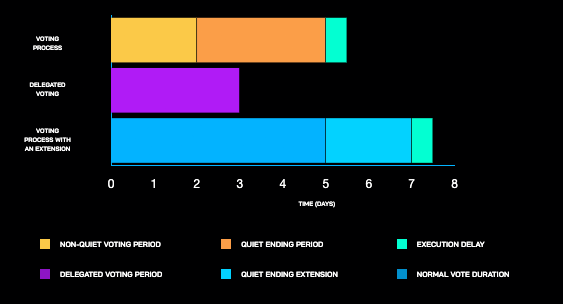 With the conviction voting module, I set the Spending Limit at 11% ensuring that we CAN fund 40k-70k proposals if we need to given our large Common Pool. … but really proposals asking for more than 4% of the Common Pool will be pretty hard to pass and should be broken up.

Assuming we have 800k in the funding pool…

And Conviction Growth basically tops off after a month so…

Fast is possible… but not too fast… Minority proposals with support can pass eventually, but it doesn’t take too long