and a HUGE thank you to @octopus who helped so much and offered such great solutions to improve praise and implement frequent analysis and to @ygg_anderson who offered the Labs space to develop this implementation!

The Praise data analysis that happened a couple of months ago showed us many routes for improving Praise. The quantification and analysis processes were two main points that needed improvement, and the interoperability with SourceCred is a desired addition that has been discussed for a while. This proposal is a first step to move forward, considering that other more complex improvements can be proposed in the future when the results from the Reward System’s research group from the Governauts will be available.

This model will distribute the work among multiple people and minimize the time each person spends on quantification. It means we’ll need 10 to 15 people to be quantifiers. This is a role that can be compensated by the Commons.

The compensation amount should be discussed, but it can be part of the Reward Proposal that needs to be templated to be sent to the DAO on a frequent basis - maybe every 2 or 3 months.

This can be a role taken by people who want to get more involved in the community since praise is a good informative of what happens and what is valued. We should aim for cultural diversity in the group of quantifiers, as well as experience diversity, some older members mixed with newer ones.

Interoperability with SourceCred and Alexandra

Integrating these 3 tools should mean that the scope of Praise is reduced. We’ll need cultural guidelines and training to get there, but it will be incredibly valuable for us, reducing even more the admin time spent in quantifications, and shaping Praise to be an even better tool for subjective contributions.

I propose we use the Reward DAO instance we’ve been using for SourceCred to send praise and SourceCred rewards to all the contributors.

The DAO will only have these 2 functions plus sending compensation to the Quantifiers. It will be managed by the SourceCred Committee, which will become the Reward System Committee.

What value will this provide for the TE community, commons and ecosystem?*

@liviade very cool and in-depth proposal. Super cool. I have skimmed and will take some time to review deeper.

Can you remind me if there is an estimated start date to this research series? Or does that depend upon proposal outcomes? Thanks!

I hope we can try to have some dry runs before the commons upgrade! in the end , we can’t do it for real until the Commons Upgrade since the Rewards DAO has no funding right now! But we should have a few practice rounds before it goes live anyway.

I think we should do a thought exercise and run thru the full process. Let’s pretend we just got 20,000 wxDai from the TEC to pass out via the reward system for the next 3 months. What steps would happen to go from there to people getting TEC in their wallet.

Could we run a test with TestDai and/or one of the TESTTECH/TESTTEC tokens that were used to prepare for the hatch?

Quantifiers could work on their own schedule, as long as they were finished by a predetermined time.

This will definitely get more people involved, including me. Sign me up.

I’m also not going to rebel against the use of sourcecred, in fact I’m quite biased. I’ve been dogfooding it and I know it works to reward labor.

With that said I would not use an instance configured in the same manner as sourcecred (the algorithm I’m in) is now for the commons.

I wouldn’t necessarily model our weight configurations and might want to see if new minds looking at it might be able to come up with new ways (socially) to use/ configure (weights) discord channels.

Because I think this needs mindful support I would gather the opinions of people who have seen it in action and have had to decolonize a bit under the hood of it. Names that come to mind would be considered stewards to the highest degree despite whether they are actively developing the sourcecred product now. (These are all people whose integrity I value and whose opinion I trust)

I’m not volunteering any of these people but I do want to name them because they have been tremendously integral to the past and or present of sourcecreds development…also this is my 1st post so I can only mention 2 people.

While these two burrrata, beanow
are inactive as far as I can tell, and I’ve never met them, I have scoured our forums and taken in hours upon hours of thier opinions. (which often challenge the capitalistic norms

) They’re gold. And from what I read it was not uncommon for them to be undervalued.

Can’t speak to thier desires but I would value thier input.

I personally would want the tec-cred instance tailored to fit the Commons Culture. The values and the vision are a part of the architectural design and it will show when people are engaging with it.
The intentions you set will influence the behavior you will get.

I know it exists but has it been tailored to fit our needs?

I guess I’m basically saying I would recommend 60-90 minutes with some seasoned lab rats to brain spar on the configuration before I would be an awwwwwww heck yes!

You can take an instance bare bones and the limit to what you can do with it is your imagination. I’d be really curious what could come of passionate folx gathering to consider the architecture. For the sake of the common stack I think it would be legit to have an intentionally tailored out of the box altruistic tool. I believe it is very close to being just that.

When I heard about the Token Engineering Commons And I started learning about it I could tell that science happens here. That folx are eager to experiment…and ready to throw stuff out if it doesn’t work. Iterating towards change is a personal passion of mine. I live it out daily.

There hasn’t been an intentional modern day iteration on sourcecred from the vantage of “okay so now we see how we’re behaving/relating…do we wanna change the product at all based on how it’s affecting us?” That’s a thing I’m quite curious about.

Me and @liviade just ran a modelling session going through the proposal. We created this overview that can be used as a starting point for more detailed discussion about the different parts, how they connect and interact. 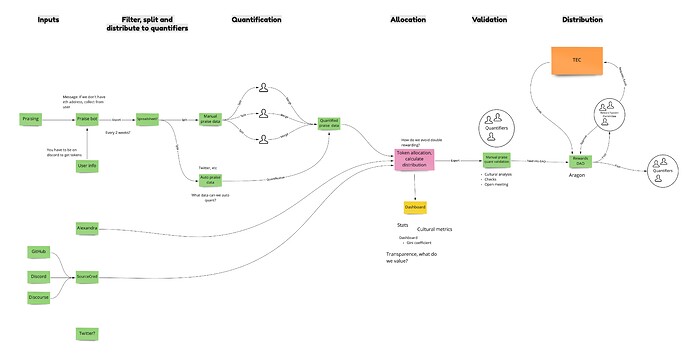 We’ll try to schedule a session in a larger group the coming week.

Notes from the proposal debate we just had

Thank you to all the commenters so far.

I have seen Sourcecred get successfully used at 1Hive. I support using SourceCred here at the TEC, supplemented with praise.

My feelings are not strong on this matter so I generally will support the majority community view here.

We must not let the perfect be the enemy of the good. I echo the ‘Set up and Go idea.’ Praise got this community this far. Therefore why not set a time-limited window for experimenting with adding SourceCred. In 30 days we will remove the Sourcecred instance unless community consensus instructs us to keep using SourceCred and/or tweak the weightings.

The point is that it becomes a safe finite limited space in which to experiment. If it goes totally sideways we have already agreed on ditching it at the 30 day mark. Only action by the community can keep the SC going after 30 days. It auto-expires.

Just my thoughts. Thanks.