We are charting out into new territories of ideology, coalescing into forms of governance and economics. We have rallied a strong community around our cause with our Trusted Seed. We should be confident in our cultural build to guide us to where we need to go without imposing technical red tape on our primary revolutionaries.

We have to recognize that the TEC at launch will not be same force as it will be in 6 months. We can expect to expand and mature with time and our post-launch settings will adjust to reflect our evolution. I have outlined envisioned changes in this proposal.

A low opening price reduces the sell pressure once we go post token freeze, likely adhering hatcher’s to our mission rather than salivating like wild beasts over the token price. However newcomers will want to take part and the buy pressure with such a low opening price will be considerable. with an ample entry tribute we can hope to secure a further amount of funding, while slightly dissuading sells with a slightly higher exit tribute.

The relationship between our reserve balance and reserve ratio will provide us with an interesting price volatility in the beginning. This is due to having such a low reserve balance, but becomes more stable as it increases because of a solid reserve ratio of ~20%. Volatility is a feature of most revolutions - we have solid foundations however and things will stabilize with time. We capture DAO funds from this volatility and use it to fund our Common’s objectives.

Tao Voting allows us to react to any discrepancies between delegates voting and the will of the community, giving ample time to react in case of contention or incongruence between the two parties. In an uncontested vote we can hope to complete a Tao Vote in one week.

In this fourth edition we combine some insights I gleaned into the heart of conviction voting while designing the conviction voting settings for Giveth with Griff and Lauren. Welcome the Iron Curtain because it will protect us from outside forces draining our common resources! 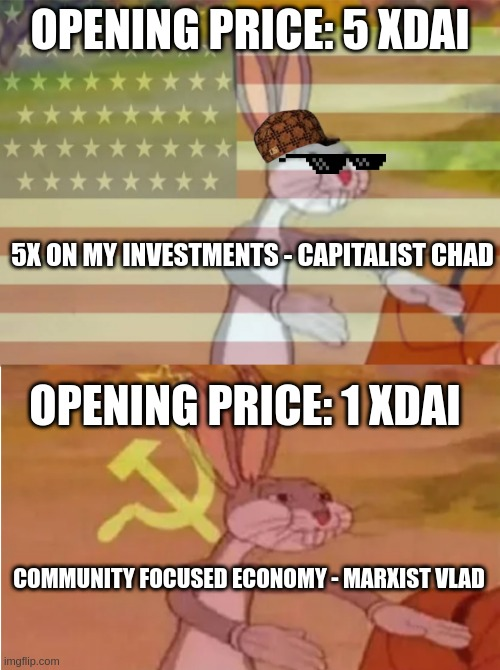 Revolutions happen quickly. We have supreme confidence in our plan to create an amazing Commons and generate value. 3 months Freeze is a reasonable amount of time in crypto to hold tokens. That being said, a year of Thaw means that TEC holder’s will be very unikely to sell their Tokens for a while since so little will be available. If they intend to sell they will wait and speculate a bit longer.

Taking this into consideration as well we have to “Trust” our trusted seed. These Hatchers are not likely to sell en masse anyway unless we really mess up.

We’re coming to realize we’ll need a good chunk of money to kick-start our vision and to adequately reward contributors and fund WGs and projects. This leaves us well over 800k to ignite the revolution.

A low opening price is fine because Hatcher’s are true believers in the cause, in the collective well being of the Commons and spreading its ideology. Even with a low initial balance the reserve ratio is at a healthy amount, this means that as our supply grows we can count of having lower amounts of price slippage

Strong tributes in the beginning will test the resolve of our new revolutionistas and penalize the feeble-willed who abandon our cause early. By having higher tributes we can hope to capture additional funding from the hype train generated by the Commons Upgrade.

Once our revolution is successful and our provisional government is established we can put our Tao Voting parameters to the test by lowering the tributes to healthier economic levels (3, 3). I envision this happening within 3-6 months.

Revolutions need to be agile as well. For this we should aim for high consensus, short-er duration.

Tao Voting might not interest everyone, but that’s why we have delegates. It should be reasonable to expect high turnout for votes since voting power should either be used or delegated, not sitting idle, this is not how revolutions are made!

A quick-er vote duration means we could wrap up and execute votes within one week. If there’s any contention we add ample time for more participation.

A greater execution delay however allows our economy’s participants to react to any potential changes to its configuration before being implemented. 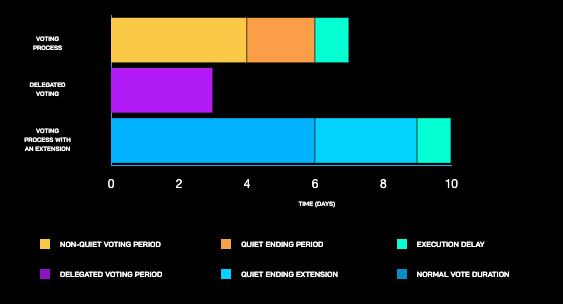 With these settings we’ll need to optimize voter engagement, even humble requests in the range of 15-35k will need an exceptional amount of tokens staked if we assume to have good engagement from hatchers. this build also protect us adqeuately from small proposals passing under the radar