Augmented Bonding Curve - An Introduction to the ABC

Token Bonding Curves are an emergent crypto-economic primitive that allow for tokens to be issued and destroyed on-demand following preset rules. The special mechanisms of this primitive allow a token to hold several important properties, the most important ones being:

The reserve currency can be anything but in our case, the Token Engineering Commons will be using wxDai (the ERC20 version of Dai on xDai worth ~ 1 USD) as our reserve currency, and the TEC token will be our asset token. 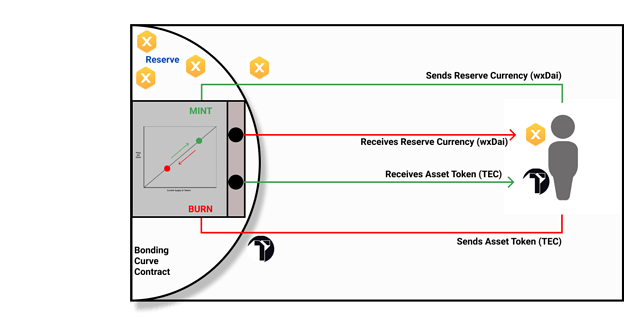 A bonding curve contract acts as a counterparty of the transaction and always holds enough of the reserve currency to buy tokens back. As the number of minted tokens increase or decrease, so does the price of the token asset. The price moves along a mathematical curve which dictates each step up or down. 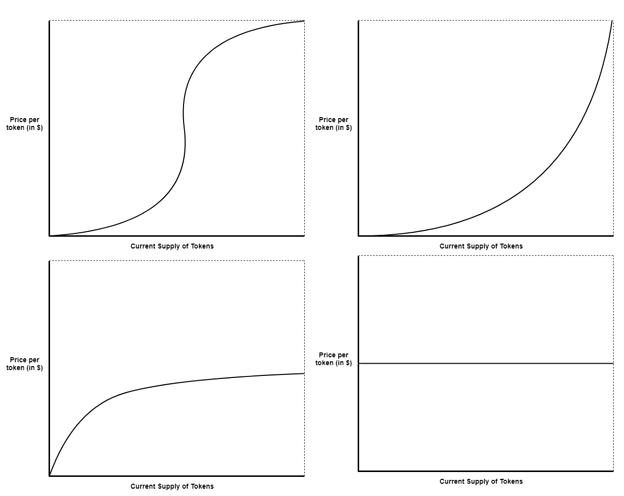 Curves can be built with several different function types. The mathematical curve that we select for our contract can provide us with many different curve shapes, each one altering the relationship between Reserve, Supply and Price.

Our Token Bonding Curve is Augmented

Now that we have a good understanding of how bonding curves work, it is time to introduce the Augmented Bonding Curve (ABC) that will be implemented within the Token Engineering Commons. The ABC utilizes the early Bonding Curve designs and introduces additional mechanisms that will allow for us to create a method for raising funds for our organization and to align the incentives of all the stakeholders that participate within it!

The ABC is launched in two phases: the Hatch Phase, and the Open Phase with the Commons Upgrade acting as a transistion between the two.

During the Hatch Phase, initial contributors (i.e. founding members of the organization, devoted contributors, initial investors or “Hatchers”) participate in a “Hatch” where the Hatchers pool their capital – in our deployment we use wxDai - to bootstrap our Commons by funding an initial goal.

Their contribution goes into the Hatch DAO and the Hatchers receive non-transferable Hatch tokens which allow them to govern the DAO. After the Hatch is over the Hatchers, now that they know how much capital they have, will collaboratively design the Commons, including the ABC, and upgrade their DAO into a Commons.

In the Commons Upgrade, a portion of the funds collected in the Hatch is put into the Common pool to be used to fund the mission of the Commons, the rest is put into the Reserve and “bonded” to the curve (i.e. minting tokens and determining the Opening Price), effectively making one large buy to initialize the ABC. These tokens are then distributed pro-rata to the Hatch Token Holders, giving each Hatcher the same price.

The purpose of the token freeze is to combat any harmful early speculation of the asset token before the Commons has time to initialize value creation. These tokens are frozen but can still be used in governance decisions. Early in the system, this token usage is critical to ensure the capital in the Common Pool is allocated to community initiatives that help grow the organization.

In the Open Phase, anyone can mint tokens by sending wxDai to the ABC. Their contribution will go directly into the Reserve, minting transferable tokens that can be burned to release wxDai from the ABC or used to vote within the system.

Whenever tokens are minted or burned, a tribute is applied. The tribute is a small percentage of the transaction sent to the Common Pool, funding of the commons. This means that even when token holders sell the system still benefits, even if speculators are just looking to make money.

At some point during the Open Phase, the Hatcher’s frozen tokens slowly thaw until they are fully liquid and all tokens can be freely traded. Hopefully by this time, the value created by the Commons’ coordination will be clear and the economy will be stable.

Before the Commons Upgrade, you will be defining many different parameters that make this system possible. It is important to evaluate those decisions against the broader goals illustrated within the design of the Augmented Bonding Curve system.

Thanks for the explanation!

I will have some edits to this post, so please check back again. To answer your questions:

Along with the exit tribute, there is also an entry tribute to fund what we are now referring to as the Common Pool. Outside of direct donations and treasury management, the tributes are the only mechanisms that directly fund the Common Pool.

This will be decided by our community of TECH holders within the HatchDAO through the Transferability parameter. If the community decides that it will be transferrable, it will be available on secondary exchanges.

It is very likely that the Commons will vote for projects that create other revenue streams… Maybe an NFT Factory that sells NFTs of research papers and a % of the funds go to the Common Pool and most goes to the Author of the Research.

Or maybe we sell TE Scouts Cookies door to door